Kṛṣṇa is God, not because He became so through meditation or the performance of austerities, but simply because He is. He appeared on this Earth planet 5,000 years ago, and played like an ordinary human being for 125 years. Yet, He always maintained His identity as The Supreme Personality of Godhead, and everything He did was extraordinary. Kṛṣṇa, The Supreme Personality of Godhead, given to us by His Divine Grace A.C. Bhaktivedanta Swami Prabhupāda, contains the pastimes of the Lord enacted during that time. They are written in story form, and are originally found in the Śrīmad-Bhāgavatam, Tenth Canto.

Included in this masterpiece are descriptions of the miracles surrounding the Advent of the ever-youthful Lord, His endearing childhood pastimes, His playful and extraordinary escapades with His cowherd boyfriends and school mates, and His intimate dealings with the young girls of the village of Vṛndāvana. There are stories of His wondrous and simultaneous activities in each of His thousands of palaces, and tales of His interactions with gods, goddesses, and demons. Even in Kṛṣṇa’s later adulthood, as He embarked on a series of political and military missions, He still appeared as a charming youth, not older than 16, with soft “peach fuzz” on His upper lip.

Śrīla Prabhupāda wanted to be sure that we had access to these wonderful transcendental tales, so he presented them to us in this format, not being sure that the time he had left on the planet would allow his translation work to include the Tenth Canto of the Śrīmad-Bhāgavatam.

These pastimes of Kṛṣṇa are windows to the spiritual world. In Bhagavad-Gītā, there are only hints given as to the nature of the topmost spiritual planet, but in Kṛṣṇa, The Supreme Personality of Godhead, we are given full access to that topmost abode and the activities therein. There is no difference between what is presented in this lovely set of books and the eternal spiritual reality. Our relationship with Kṛṣṇa is of five basic types, and we naturally love Him in various ways- in appreciation, as a servant, as a friend, as a parent, and as a lover. All these relationships, with their personal varieties, are illustrated in this glorious literary work, not simply for example sake, but they are naturally present in the narratives of the flow of loving exchanges between the Lord and His devotees. A person who is fully realized will relish these pastimes over and over again, finding new depth with every read, and a newcomer to Kṛṣṇa Consciousness will be refreshed, having found spiritual shelter for a mind that loves to absorb itself in stories of all kinds.

Śrīla Prabhupāda states in his preface to this very substantial presentation, “It is said in the Bhagavad-Gītā that even a little effort expended on the path of Kṛṣṇa Consciousness can save one from the greatest danger. Hundreds of thousands of examples can be cited of people who have escaped the greatest dangers of life due to a slight advancement in Kṛṣṇa Consciousness. We therefore request everyone to take advantage of this great transcendental literature. One will find that by reading one page after another, an immense treasure of knowledge in art, science, literature, philosophy, and religion will be revealed, and ultimately, by reading this one book, Kṛṣṇa, love of Godhead will fructify.” 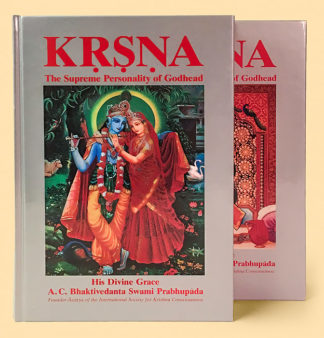