Bhagavad-Gītā As It Is

There have been many editions of the Bhagavad-Gītā presented in English to the modern world, but this edition, Bhagavad-Gītā As It Is, by His Divine Grace A.C. Bhaktivedanta Swami Prabhupāda, is the only edition that is purely presenting the mission of the Supreme Lord, Śrī Kṛṣṇa. This mission is to reestablish the real purpose of life when mankind forgets that purpose, and deliver humanity from the suffering and ignorance of material existence. Bhagavad-Gītā As It Is is coming in the line of pure devotional teachers, beginning from Lord Śrī Kṛṣṇa Himself. As compared to other renditions of Bhagavad-Gītā, this edition is completely free of misleading speculation or misinterpretation due to personal or political agenda or lack of realized knowledge.

Bhagavad-Gītā was spoken by Lord Śrī Kṛṣṇa to Arjuna in the midst of the two armies at the onset of the famous Battle of Kurukṣetra 5000 years ago. Arjuna was a personal friend and associate of the Lord, so he is never actually in ignorance. However, he was being asked to fight in a war, with victory guaranteed, in which he had friends and relatives on both sides. He was purposefully placed into confusion about his duty by the Lord in that most stressful circumstance so that he could ask questions and have them answered by the Lord Himself. The wisdom imparted by Śrī Kṛṣṇa in that conversation was destined to benefit many generations to come.

Bhagavad-Gītā forms one chapter of the epic Mahābhārata, or Greater History of India, but is by far the most important one, because it addresses the deep inquiries and hankerings of heart that are common to only the most intelligent of persons. Everyone is suffering in this material world, but only a few actually inquire about their position, who they are, why they are in this uncomfortable situation, where they belong, what happens at death, and so on. Real human life begins with this type questioning, and for one who enters into the spirit of understanding his position, Bhagavad-Gītā As It Is is presented.

In this famous literature, Kṛṣṇa’s greatness is gradually established through a series of relevant studies, and gives information how the living being can achieve spiritual perfection, even in these most difficult and challenging times. The purports given by Śrīla Prabhupāda to the original Sanskrit verses are a compilation of the commentaries of previous authorized Vaiṣṇava scholars and the author’s own astute, devotional observations and insights that render this classic literature quite understandable and relevant to the members of modern society.

Śrīla Prabhupāda explains in his preface to this work, “One cleanses himself daily by taking a bath in water, but one who takes his bath only once in the sacred Ganges water of the Bhagavad-Gītā cleanses away all the dirt of material life. Because Bhagavad-Gītā is spoken by the Supreme Personality of Godhead, one need not read any other Vedic literature. One need only attentively and regularly hear and read Bhagavad-Gītā. In the present age, mankind is so absorbed with mundane activities that it is not possible to read all of the Vedic literatures. But this is not necessary. This one book, Bhagavad-Gītā, will suffice because it is the essence of all Vedic literature and because it is spoken by the Supreme Personality of Godhead.”

Bhagavad-Gītā is complete in itself, and is unlimitedly fulfilling, giving newer and newer freshness and inspiration with each read. It also serves as the preliminary study of the science of the Supreme Person and our relationship with Him, and opens up greater understandings through which one may systematically progress through other Vedic literatures, especially the many cantos of Śrīmad Bhāgavatam and Śrī Caitanya Caritāmrta, which are considered by spiritual authorities to be the graduate and post-graduate studies of spiritual relationship. 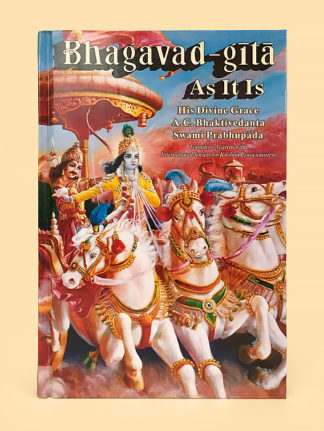