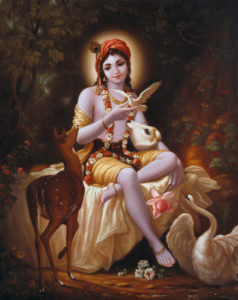 Most of the larger books that we offer contain a full guide to Sanskrit pronunciation, including the original Devanāgari letters, or in the case of the Caitanya-Caritāmrita set, the Bengali equivalent. There are several schools of presenting the English transliterations, and according to the one used in Śrīla Prabhupāda’s books, here are some basic hints you might have fun exploring, even as you peruse our book descriptions and other introductory material.

“S,” with either a slash over it (Ś) or a dot under it (ṣ), is essentially pronounced ”sh.” The tongue that is trained in English will naturally have a hard time with a lot of the subtleties of the consonants.

“ṇ” is not familiar to the western tongue. Pronounce like “n” for practical purposes.

The vowels are interesting in that there is no syllable accent in Sanskrit, but rather the short vowels are held for one beat, so to speak, and the long vowels are held for two beats, lending a beautiful poetic rhythm to the language. The vowels and consonants always sound the same as they are indicated. In other words, there is a set of pronunciation rules that always applies, with no exception, as opposed to the English language, which has confounded students for ages.

Therefore, you can see how “Kṛṣṇa” is often pronounced and written as “Krishna.” “Śrī” could also be written and pronounced as “Shree,” Śrīla as “Shreela,” and “Caitanya” or “Caran” will be pronounced like “Chaitanya” or “Charan.” It will feel familiar very soon. There was no way to make this web presentation without the introduction of some things that would initially feel new to most readers.