Queen Kuntī appeared as the aunt of Lord Śrī Kṛṣṇa when He personally walked the Earth planet 5,000 years ago. She is famous in the history of India as the wife of the great King Pāṇḍu, and the mother of the five Pāṇḍava brothers. It was a time of great political strife, and the exalted Queen’s family had been through severe difficulties. She knew fear, war, and political intrigue, and experienced the early death of her great husband and the ongoing harassment of hers sons by their envious cousin-brothers. Her love for the Lord never waned, and she never turned from Him, even in the midst of such persecution. The escalating political turbulence eventually resulted in the famous Battle of Kurukṣetra, following which, rightful leadership was established by the personal hand of the Lord. As Śrī Kṛṣṇa was preparing to depart Hastināpura, His purpose there having been fulfilled, Queen Kuntī approached Him on His chariot and offered heartfelt prayers. These prayers, spoken by a most intelligent woman with passion and poignancy, immortalize her great wisdom and devotional heart. Her beautiful, poetic words are recorded in the epic Śrīmad-Bhāgavatam, first canto, eighth chapter, verses 18-43, and have been providing inspiration and insights to countless devotional aspirants for centuries. The combination of the powerful invocations and realizations of the famous Queen Kuntī, and the in-depth explanations and clear perceptions of Śrīla Prabhupāda as he discusses each verse, make for a moving and spiritually educational read. This book has been a source of great solace and upliftment for many people in times of difficulty.

The commentaries by His Divine Grace A.C. Bhaktivedanta Swami Prabhupāda that follow each verse in this book are lectures that he delivered in Los Angeles in 1973, and are different from the traditionally written purports that he presents in the 30 volume Śrīmad-Bhāgavatam set that is also available from this website. 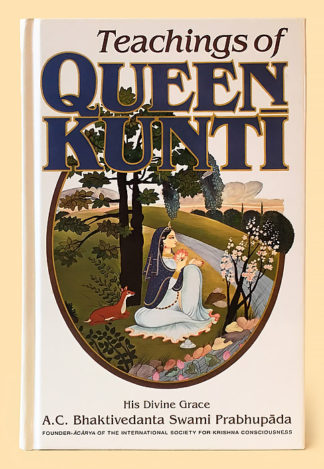 You're viewing: Teachings of Queen Kuntī $8.00
Add to cart