View cart “Search for Liberation” has been added to your cart.

Search for Liberation is mainly comprised of interviews and conversations between His Divine Grace A.C. Bhaktivedanta Swami Prabhupāda and John Lennon and his wife, Yoko Ono. The featured conversation takes place at John’s Tittenhurst estate in mid-September of 1969, when Śrīla Prabhupāda and some of his students were staying there as guests. Many topics were discussed, including how to attain peace and liberation from material existence, the eternality of the soul, re-incarnation, the qualifications of a bonafide spiritual master, the importance of the Bhagavad-Gītā, and the supremacy of the Hare Kṛṣṇa mahāmantra. Śrīla Prabhpāda handles all the inquiries with personal concern, while addressing the issues of the times with great relevancy.

Included is a short essay by Śrīla Prabhupāda called “The Peace Formula” that was written in 1966, during the time of widespread anti-war protests, and originally distributed as a leaflet. There is also another essay, spoken by Śrīla Prabhupāda in 1966, on the meaning and value of the Hare Kṛṣṇa mantra. It was originally recorded on the first LP produced by the students of His Divine Grace. This album caught the interest of many young people of the time, including George Harrison of the Beatles, who then desired to learn more. There also is a very insightful letter of Śrīla Prabhupāda regarding a past birth of John Lennon.

Even though the contents of this small, paperback book are set in a very specific and interesting period of history, with prominent personalities of the time, the teachings are fresh, new, and eternally relevant. It is a fun and easy read, and spiritually inspiring. 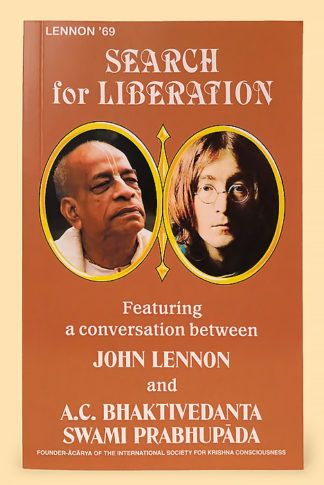 You're viewing: Search for Liberation $2.00
Add to cart