The word “Caitanya” means “living force.” “Carita” means “character,” and “amṛta” means “immortal.” “Caitanya-Caritāmṛta” may thus be translated as “The character of the living force in immortality.” We are all immortal by nature, but in this material world, we cannot exhibit this eternal nature. The Supreme Lord, however, is never affected by the material energy, being Himself the source of it. Even when He appears among us, His eternal nature is always manifest. Lord Caitanya is the combined forms of Śrīmatī Rādhāranī and Śrī Kṛṣṇa appearing in this mundane realm for many purposes, including teaching the conditioned living entities, by His personal example, the proper process for breaking free of the material shackles and again exhibiting their immortality in the eternal realm of the Supreme Lord.

Caitanya-Caritāmṛta, by Kṛṣṇadāsa Kavirāja Gosvāmī, is considered a post-graduate study in the devotional process. It is not generally for the beginning student, but can be understood by the novice because of the explanations provided by Śrīla Prabhupāda in his thoughtfully produced commentary to each verse. All the transcendental literatures are, in actuality, on the same plane, but usually one first studies Bhagavad-Gītā, then Śrīmad-Bhāgavatam, and then Caitanya-Caritāmṛta. This book, translated from the original Bengali by His Divine Grace A.C. Bhaktivedanta Swami Prabhupāda, is presented in 17 volumes, which are divided into the beginning, middle, and final pastimes of the Lord.

Any description that we have provided for Teachings of Lord Caitanya also applies to this multi-volume presentation, although this presentation is obviously more in-depth in content and detail due to its size.

Everything about Lord Caitanya’s life was exhibited by Him in perfection. All attributes of all the living beings originate in the Lord, and He demonstrated the natural propensities of the soul, but in total magnificence, as only the Lord Himself can do it. His appearance as a child was endearing, rich in the many activities of that age, including the escapades that might drive a parent crazy, all executed to perfection to reciprocate with His devotees and further the wonderment of loving exchanges. As a youth, the Lord was an ideal student and scholar, even exhibiting the arrogance that a young lad of this world might portray. “He was the perfect husband, an exemplary son, the flawless renunciate, and then He revealed Himself as the greatest of all devotees, exhibiting the highest of transcendental emotions and symptoms as only God Himself could do. All the while, He was the teacher of the process of devotional service, and instructed those around Him according to their unique personal positions and circumstances. He upheld the culture of devotion in every way, and tolerated no deviation or speculation, while experiencing the highest love of Godhead Himself and drawing those around Him to ever increasing levels of loving ecstasies. He and His associates showed the greatest compassion upon the fallen souls, delivering both the worst of the sinners and the most misguided of the mental speculators and erudite impersonalist scholars along with their multitudes of followers.

Lord Caitanya demonstrated the perfection of Personalism, that God is a person, we are all persons, and that there is an eternal, loving relationship between the Lord and the devotee that is real and ever-increasing in its satisfaction. Along with His associates, He inaugurated the Saṅkīrtana movement, or the organized public chanting of the Holy Names, Hare Kṛṣṇa Hare Kṛṣṇa Kṛṣṇa Kṛṣṇa Hare Hare Hare Rāma Hare Rāma Rāma Rāma Hare Hare, the Yuga-dharma, or the very means for deliverance in this age.

Lord Caitanya and His dearmost associates from the eternal spiritual kingdom walked among us on this planet only 500 years ago. They gave the greatest gifts of devotional wisdom that can become immediately experiential simply by reading these immaculately produced volumes. Caitanya-Caritāmṛta gives a total package how to apply ourselves to the relevant method in this age for spiritual development, and then how to get unlimited spiritual benefit simply from sharing this method with others. Śrīla Prabhupāda is the perfect and pure transmitter of this great work, and his elegant presentation has rendered the deepest and most intimate of transcendental subject matters easily absorbed into the hearts of the sincere soul. This beautiful set of books is essential for any complete devotional library, and will lend a mood of upliftment to any home, simply by its presence. 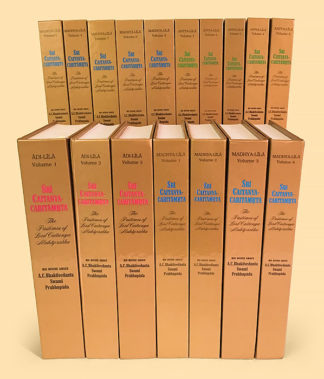